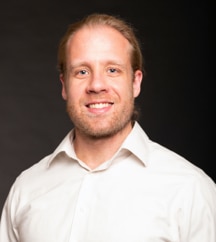 Dr. McFarlane was born and grew up in Toronto, Canada. He earned his A.B. in Biochemical Sciences from Harvard College.  He went on to complete his medical degree and Ph.D. at the University of Texas Southwestern in Dallas, where he trained with Nobel Laureates Mike Brown and Joe Goldstein. This was also where he fell in love, both with the southwest, and his wife, a native Texan and recording artist. After completing an internship at Scripps Mercy Hospital in San Diego, Dr. McFarlane finished his residency in Radiation Oncology at the University of Michigan where he also served as Chief Resident.

He has contributed to various publications and is the recipient of multiple awards.  Dr. McFarlane is a member of the American Society for Radiation Oncology, American College of Radiology and the Radiation Research Society. He joined the Center for Neurosciences in 2021.

He has four cats and will happily show you cute photos of them on request.